A Weekend in Barcelona Training with Alba Weiman 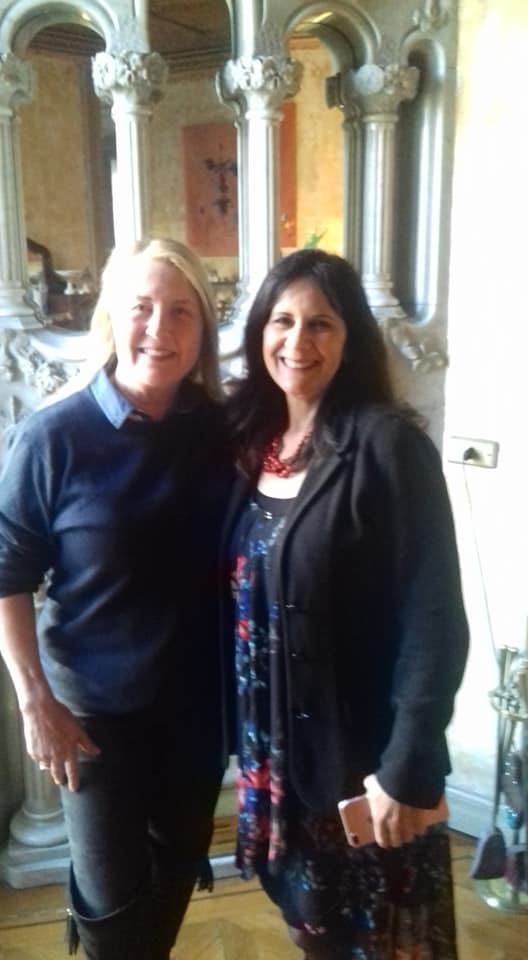 I have just returned from an inspiring weekend training with one of the World’s leading Past Life Regressionists, Cuban/American Alba Weinman, in Spain. The setting was superb at the beautiful Casos Ramos building, recently restored, in the exclusive Gracia district of Barcelona, designed by the architect Jaume Torres I Grau in 1906, and used in many film productions. It was the ideal setting for us, plenty of space, oldie worldy, and in the centre of the hustle and bustle of the square.

When your house is aligned with the positive energy of the present time, magic and miracles can happen and we were not disappointed.

It was a delight to work with Alba, and other trainees,who had travelled from around the world from eight different countries, enabling us to appreciate the richness within those cultures. We spent the morning getting to know each other, our life journey and experiences so far. Each one a web of emotional lessons, work and changes, which had brought us together. It was refreshing to see three male members in our group. By the afternoon we were fused into a strong team of enthusiastic light workers.

Alba has a natural serenity about her, we absorbed her words of wisdom, and the format of her lesson plans like hungry school children, excited and thrilled to be scribbling away with our findings. The meditations and techniques provided us with great insight and some unexpected surprises.

One student in trance became a channel for spirit. As most “trance-mediums” often claim, when he emerged from the trance state, he had no recollection of the treasured messages he conveyed to the group. In one lesson we were separated into groups of three and only permitted to speak in the third party, no I, no you, no ego. It is not until you practice this method that you realise how strong a hold the ego can affect your thinking.

The experience brought about unanticipated revelations, we looked within ourselves for the answers. We were able to express our discoveries in a safe and controlled environment, continually guided by Alba, who would gently nudge us along our path. Alba’s approach was one of direction without narrowing the mind of the student. This in itself, is a great talent. I look forwards to applying the latest techniques for the benefit of my clients in the weeks, months and years to come.

Even during lunch, we were motivated to ask more questions, share experiences, talents and gifts. The time flew by, and we bubbled over with the pleasure of sharing company with like- minded people.

The final meditation of the day was for the people of Catalonia. There had been violent protests in the city the previous day as Catalan leaders face imprisonment for defying the government. It was a privilege to be able to express solidarity with these wonderful people, and as the meditation finished, we all experienced a serenity, which we hope will endure long after we have left. Barcelona and Catalonia are delightful places to visit with gentle, peaceful people. I do hope that the country can find a way to heal.

The day was coming to an end all too soon, so we decided to go to a cafe for a debrief, which spilled over, resulting in us extending it to dinner at a Japanese restaurant, and even more discoveries. The weekend, and group, was such a success that we are arranging a trip to Glastonbury this summer, another workshop in Barcelona, and already have a group network forum to exchange our plans and ideas.

This is a little bit more about Alba in her own words:
“My spiritual awakening began in the mid 1980’s when I read a book by Shirley McLaine called “Out on a Limb”. I was then drawn to the Seth Material and read many books by Ruth Montgomery about her gift of Automatic Writing. I also wanted to connect to the spirit world so on one evening in 1987, I meditated with a pad of paper on my lap and pen in my hand and that’s when it all began.

I was born in Havana, Cuba and our family lived on the military base of La Cabaña until the government was overthrown by the communist dictator, Fidel Castro, in 1959. Since my father was a high-ranking officer from the previous regime and his life was in danger, our family quickly fled the country. After receiving political asylum, we began our new life in the United States. I grew up in Fort Lee, New Jersey and moved to Miami, Florida after graduating High School.

I worked in the field of Telecommunications and Information Technology and although I loved my job, I wanted to help people even more. In 2007 became a Personal Empowerment Coach and founded Hopes and Achievements, Inc., teaching my clients about the Universal Law of Attraction based on the Abraham-Hicks material and the information I was receiving via my writings.

In 2009, my faith was tested when my teenage son was wrongfully accused of crimes he did not commit. During this time, I learned about the healing power of forgiveness. After my son was exonerated and cleared of all charges, my purpose and mission in life was revealed and I was able to see how God had guided me through that very dark period and forged me into the person I am today; a person who can empathize with others’ heartaches and know that they can heal with self-love and forgiveness.
In 2013, I was guided to Dolores Cannon’s videos on YouTube and saw that as my next step in helping others by using hypnosis to access a person’s Higher Self. I took her QHHT (Quantum Healing Hypnosis Therapy) class and became a certified practitioner.

In 2016, I was mentored by the world-renowned hypnotherapist, Aurelio Mejia, in Medellin, Colombia, and expanded my practice using Forgiveness Therapy and Spirit Releasement techniques. In 2017, I completed 500 hours of training with the Institute of Interpersonal Hypnotherapy, a State-Licensed Hypnotherapy school in Florida, and became certified as a Clinical & Transpersonal Hypnotherapist. In my hypnosis sessions, I use a combination of Transpersonal and Introspective Hypnotherapy techniques which emphasizes the powerful act of forgiveness with ourselves and with others. I call my technique the Spiritual Journey of Forgiveness™. During these sessions, I work with my clients to access repressed emotions which are stored in their subconscious minds, access their Divine Higher Self to get answers to their questions, and free the soul of emotional burdens, thought forms and entities that may influencing their lives.”

0 0 votes
Article Rating
Subscribe
Login
0 Comments
Inline Feedbacks
View all comments
← Will you Perform a Past Life Regression on my Child? CAN YOU HELP MY CHILD THROUGH REGRESSION? →