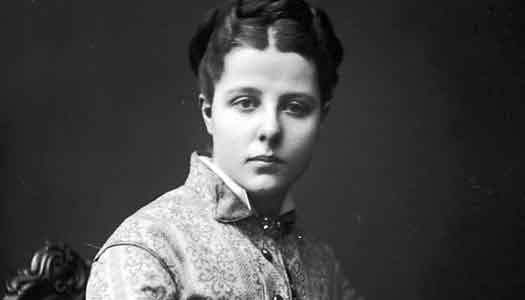 In 1867, Annie at age 20, married Frank Besant, a clergyman, and they had two children, but Annie’s increasingly anti-religious views led to a legal separation in 1873.

She then became a prominent speaker for the National Secular Society (NSS) and writer and a close friend of Charles Bradlaugh.

In 1877 they were prosecuted for publishing a book by birth control campaigner Charles Knowlton.

The scandal made them famous, and Bradlaugh was elected M.P. for Northampton in 1880.

She became involved with union actions including the Bloody Sunday demonstration and the London matchgirls strike of 1888.

She was a leading speaker for the Fabian Society and the Marxist Social Democratic Federation (SDF). She was elected to the London School Board for Tower Hamlets, topping the poll even though few women were qualified to vote at that time.

In 1902, she established the first overseas Lodge of the International Order of Co-Freemasonry, Le Droit Humain. Over the next few years she established lodges in many parts of the British Empire. In 1907 she became President of the Theosophical Society, whose international headquarters were in Adyar, Madras, (Chennai).

She also became involved in politics in India, joining the Indian National Congress. When World War I broke out in 1914, she helped launch the Home Rule League to campaign for democracy in India and dominion status within the Empire.

This led to her election as president of the India National Congress in late 1917. In the late 1920s, Besant travelled to the United States with her protégé and adopted son Jiddu Krishnamurti, who she claimed was the new Messiah and incarnation of Buddha.

Krishnamurti rejected these claims in 1929. After the war, she continued to campaign for Indian independence and for the causes of theosophy, until her death in 1933
Besant had met fellow theosophist Charles Webster Leadbeater in London in April 1894. They became close co-workers in the theosophical movement and would remain so for the rest of their lives. Leadbeater claimed clairvoyance and reputedly helped Besant become clairvoyant herself in the following year. In a letter dated 25 August 1895 to Francisca Arundale, Leadbeater narrates how Besant became clairvoyant. Together they clairvoyantly investigated the universe, matter, thought-forms, and the history of mankind, and co-authored a book called Occult Chemistry.
In 1906 Leadbeater became the centre of controversy when it emerged that he had advised the practice of masturbation to some boys under his care and spiritual instruction. Leadbeater stated he had encouraged the practice to keep the boys celibate, which was considered a prerequisite for advancement on the spiritual path. Because of the controversy, he offered to resign from the Theosophical Society in 1906, which was accepted. The next year Besant became president of the society and in 1908, with her express support, Leadbeater was readmitted to the society. Leadbeater went on to face accusations of improper relations with boys, but none of the accusations were ever proven and Besant never deserted him.
Until Besant’s presidency, the society had as one of its foci Theravada Buddhism and the island of Sri Lanka, where Henry Olcott did the majority of his useful work. Under Besant’s leadership there was more stress on the teachings of “The Aryavarta”, as she called central India, as well as on esoteric Christianity.
Besant set up a new school for boys, the Central Hindu College (CHC) at Banaras which was formed on underlying theosophical principles, and which counted many prominent theosophists in its staff and faculty. Its aim was to build a new leadership for India. The students spent 90 minutes a day in prayer and studied religious texts, but they also studied modern science. It took 3 years to raise the money for the CHC, most of which came from Indian princes. In April 1911, Besant met Pandit Madan Mohan Malaviya and they decided to unite their forces and work for a common Hindu University at Banaras. Besant and fellow trustees of the Central Hindu College also agreed to Government of India’s precondition that the college should become a part of the new University. The Banaras Hindu University started functioning from 1 October 1917 with the Central Hindu College as its first constituent college. That legacy remains to this day.
Blavatsky had stated in 1889 that the main purpose of establishing the society was to prepare humanity for the future reception of a “torch-bearer of Truth”, an emissary of a hidden Spiritual Hierarchy that, according to theosophists, guides the evolution of mankind. This was repeated by Besant as early as 1896; Besant came to believe in the imminent appearance of the “emissary”, who was identified by theosophists as the so-called World Teacher.[/cs_text][/cs_column][cs_column fade=”false” fade_animation=”in” fade_animation_offset=”45px” fade_duration=”750″ type=”1/3″ style=”padding: 0px;”][x_image type=”none” src=”https://jane-osborne.com/wp-content/uploads/2017/07/annie-besant.jpg” alt=”” link=”false” href=”#” title=”” target=”” info=”none” info_place=”top” info_trigger=”hover” info_content=””][/cs_column][/cs_row][/cs_section][/cs_content]