My visit to The Mah Meri Tribe 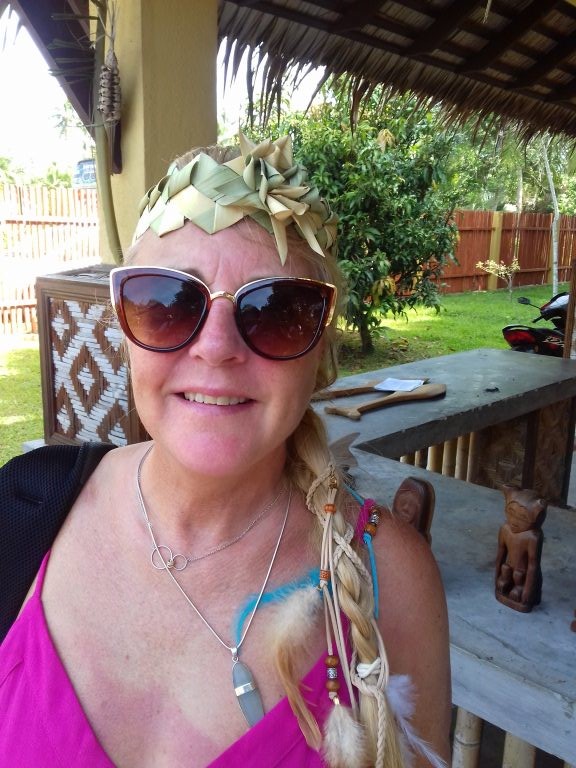 I have recently completed a tour of the Far East. What a fabulous place to visit! I shall be writing extensively about my experiences and places visited, so many of which had spiritual connections.

Firstly, I would like to tell you about my memorable visit to the Mah Meri tribe in Malaysia where I met the village Shamen, the Bomoh, and experienced the Healing Hut, as well as meeting  the village chief, the Batin.

The Mah Meri, who number around 2200, believe in forest and natural spirituality, and  Animism.  They  are an ethnic group native to the western part of Peninsular Malaysia , and are renowned for their traditional wood carving skills. Mah Meri  means “Jungle and  forest people” . They are  skilled in carving statues that are made from wood, including deities, humans, flora and fauna figurines.  Some academics believe that they may be the ancestors of the Australian Aboriginees.

To approach  their village we had to travel through miles of palm oil tree plantations  which have been commercially planted to replace the original forests. The Mah Meri believe that humans, plants, animals, and  inanimate objects possess spirits, which interact with the daily lives of the Mah Meri and that ancestral spirits cursed plants and animals to become food for humans. For them  illness or injury is caused by offended spirits of plants or animals which have been killed. Natural disasters are the result of transgression of their moral code. Needless to say, I was on my best behaviour!

In earlier times, woodcarving of characters or moyang masks and figures from folk stories were used in spirit huts and left in the jungle, as offerings to the forest forces, mythological characters which reign supreme. These moyang influence health, illness, and healing. Their main festival is the Day of the Ancestors where offerings and rituals are made to their ancestral spirits. They see dreams as indicators of future events.

Their traditional dances performed for us included the Sewang dance, Tarian Jo’oh (Jungle dance), and Tarian Topeng (Mask dance). The Healing Hut meet with the Bomoh was fascinating as he explained the main puteri , a  ritualistic form of treatment which rejuvenates the soul . The highlight though was a mock wedding ceremony which introduced us to some curious quirks of romantic beliefs.

0 0 votes
Article Rating
Subscribe
Login
0 Comments
Inline Feedbacks
View all comments
← Jane Osborne Past Life Regression with her own Quantum Healing and Beyond Hypnosis Techniques Landscapes, Memories, and Past Lives →