Past life memory of living in the Klu Klux Klan era 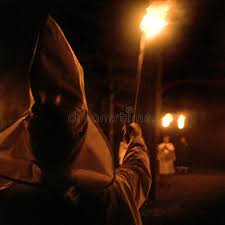 Names have been changed to protect the identity of the client.

Kylie was a woman in her thirties with an interest in past life regression reading to see if anything from a previous life would help her in this life.
Entering the past life, she found herself as a black man called Joshua who was walking down a cobbled street returning from someone’s house. It was Bourbon St, United States.

He had gone there to see a lady who read his letter, which was delivered to the plantation. The letter was to inform him he was now free.
On hearing this he went to visit his mother who was working in a little speak easy booth bar serving the men.

His mother in that life was also her mother in this life. Joshua had no brothers or sisters in that life, neither did he have a wife.
He worked as a labourer on the farm plantations but now he was free to get a job elsewhere, to include the possibility of out of state.

Moving on to another time in the same life Joshua spoke of being at his mother’s funeral with a few selected people. One of the women was a large woman who went by the name of Masie Lou, she was not in this life today. After the funeral they went to the pastures house for the wake.

He was back in his home town living in a small one bedroomed house close by, he had moved home to looked after and care for his mother. Now she had died he had no plans and no idea what to do.

Moving on in the same life to another important scene where something significant was happening to him we travelled forward to when Joshua was forty-two years old.

He was walking down a concrete street to visit a lawyer with the intention of building his business in textiles and cloth. The meeting went very well, and he soon had three thousand workers spanning two factories.

Joshua spoke of a girlfriend by the name of Jay who worked in his office part time, she also worked in a speak easy booth bar part time. Jay was his mother in this life today.

Moving onto forward to another scene in that same life time Joshua spoke of a huge fire raging down on one of his factories in 1957, there were fire trucks everywhere but to no avail. He knew it was arson and knew who was responsible. It was the Klu Klux Klan, the whites hated them, they were murdering people and fighting the civil black right movement. He had gotten big for their eyes.

Although Joshua was outraged he vowed to do nothing to avert their attention or retaliate. He went on to build a smaller factory.
Jay and Joshua did not marry but they did have a daughter by this time of twelve years old by the name of Mary. Mary was his sister in this life.

Moving to another scene in the same life time Joshua found himself fighting through a crowd of Mardi Gras festival goers to get home, home was New Orleans 1961. He was expecting guests at his home. The were from the Council who wanted to offer help in building another factory. There were two females and two males in the Meeting. Sarah, Jessica, Kyle and Mikhail. Joshua was reluctant to build another factory due to the attack.

Moving on in the same life time to another event he found himself in a big city. Jay had passed away two years previous and had moved there to retire after her death. He bought a farm on the outskirts of New Orleans where he tended to his animals, this brought much comfort to him.

Joshua had a cleaning lady who would visit him at the farm, her name was Chrissie and not relevant in the life today. He spoke of his past time of painting scenes, he enjoyed his art.

Moving to his death scene Joshua was at his farm in bed, week and full of illness. Chrissie attended his needs and his daughter came back to say her goodbyes. On transition Joshua was very irritated that they both began to bawl, something he had told them not to because it would make him sad.

His father came to take him back to the spirit world. This displeased him as he used to beat him as a child. The message from his father was to stay strong and follow him, he had a lack of trust for his father but followed him in due course.

Joshua found himself outside a red painted wooden door, he went through the door to a beautiful sunny place, alive and wonderful, which replenished his soul. We moved on to his soul group, which gathered by the beach, still warming his soul.

His grandmother greeted him. Joshua’s father tried to gain forgiveness, but Joshua was still hurt and refused. His grandfather was also present who enveloped him in love, they were a group of souls that worked empathically. The role was to help others.

Inner Self
The Inner self went by the name of Simone and it was the first time they had worked together. She was there to help Kylie not to be so hard on herself. We did a body scan to see if we could help Kylie in her life today by lifting old thought forms from her aura.
Body Scan
Knees – shadows and memories of past life. It was a lingering spirit that caused her pain, it liked to be with Kylie, but we soon gained the consent for it to travel to the spirit world to be healed and replenished and filled the aura with love, compassion and happiness.
Elbow – This was described as a darkness. It was a spirit of no name who informed me that it should not have been there but got stuck. We released the spirit energy and replaced the area with love and the colour red.

Kylie had provided me several questions prior to the regression she sought answers for. Her inner self answered these questions for her.
Cards – she needs to meditate more and let go, she is not going to progress until she accepts.
Throat – you have dealt with this today.
Knee – all removed today thank you.
Mother – your mother will never change, you must accept this. You cannot force anything on her, she is stubborn, like yourself, she is set in her ways.
Feet – she has peeling skin and needs to cream them more, she needs to take care of herself and respect herself more.

On completion I asked if there was a message for Kylie.

Stop pulling yourself down. Relax, trust yourself, meditate and think positive.