The Gateway to Hell? 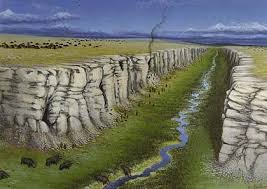 Great Britain has many profoundly spiritual places with traces of man dating back 250,000 years. A hidden gem is Creswell Crags. It is an enclosed limestone gorge on the border between Derbyshire and Nottinghamshire, England, near the villages of Creswell and Whitwell. The cliffs in the ravine contain several caves that were occupied during the last ice age, between around 43,000 and 10,000 years ago.

Its caves contain the northernmost cave art in Europe. The evidence of occupation found in the rich series of sediments that accumulated over many thousands of years is regarded as internationally unique in demonstrating how prehistoric people managed to live at the extreme northernmost limits of their territory during the Late Pleistocene period.

The caves contain occupation layers with evidence of flint tools from the Mousterian, proto-Solutrean, Creswellian and Maglemosian cultures. They were seasonally occupied by nomadic groups of people during the Upper Palaeolithic and Mesolithic periods. Evidence of Neolithic, Bronze Age, Roman and post-medieval activity has also been found there.

New discoveries are always being made the latest of which are hundreds of anti-witch marks found in one of the caves which appears to be Britain’s biggest collection of protective signs.

If there is a gateway to hell, a portal from the underworld used by demons and witches to wreak their evil havoc on humanity, then it could be in a small east Midlands cave handy for both the M1 and A60.

Heritage experts have revealed what is thought to be the biggest concentration of apotropaic marks, or symbols to ward off evil or misfortune, ever found in the UK.

The markings include hundreds of letters, symbols and patterns carved, at a time when belief in witchcraft was widespread. The scale and variety of the marks made on the limestone walls and ceiling of a cave which has at its centre a deep, dark, hole, is unprecedented.

Believed to protect against witches and curses, the marks were discovered by chance at the site, which is also home to the only ice age art ever discovered in the UK.

Paul Baker, the director of Creswell Heritage Trust, said the marks had been in plain sight. They had known they were there. “But we told people it was Victorian graffiti,” he said. “We had no idea. Can you imagine how stupid we felt?”

The trust was alerted to the marks last year by Hayley Clark and Ed Waters. The two keen-eyed cavers thought there were perhaps two or three markings; it soon became clear there were dozens and then on further investigation up to a thousand. And counting. “They are everywhere,” said Baker. “How scared were they?”

Up close the walls are a remarkable frenzy of marks. Everywhere you point a torch there are overlapping Vs, a reference to Mary, virgin of virgins. There are also PMs, as in Pace Maria, and crossed Is, referring to Jesus on a cross, and odd-shaped As.

The letters and symbols were Christian but should not be looked at in that context, she said. From the 16th century to the early 19th century, when people made witches marks, there may have been a lack of association with religion, such as today when people might cross fingers or say, “oh god”. It just becomes a protective symbol. It was a mark you always made to protect yourself.”

What the marks were keeping out, or in, can only be speculated on. It could be fairies, witches, whatever you were fearful of, it was going to be down there. The cave markings fit in with local history since the post-mediaeval village of Creswell used to be much closer to the caves. The dukes of Portland had relocated the village 20 minutes’ walk away during a spot of 19th century landscaping for themselves.

Natural landscapes were once regarded as scary places, where supernatural forces in an untamed non-human environment could be at work. Local people are in the jaws of this monstrous landscape.

Ritualistic protection marks are most commonly found in houses and churches, in doors and windows, to ward off evil spirits. They have been found in caves but never on this scale.

Creswell Crags hit the headlines in 2003 when ice age cave art, including figures of birds, deer, bison and horses, were discovered.

The announcement of the latest find in 2019 was made by Creswell Crags and Historic England. Baker acknowledged that the witches’ marks might bring a new type of visitor.

Ronald Hutton, a professor and leading authority on folklore, said the find was hugely important and exciting. “It looks like the largest assemblage of protective marks ever found in British caves, and possibly anywhere in Britain.”